So.  We are renovating the chicken coop. 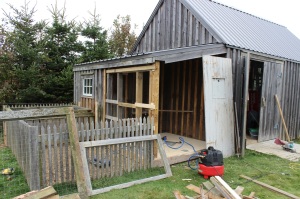 We are effectively doubling the size of the fully insulated, winter cozy, multi windowed coop. This, at a time of year when we simply do have a spare moment to take on an extra project.  All because we have broken our cardinal rule: do not become too attached to chickens!  Or, in this case, hen.  That sweet little Phoenix hen was my gardening companion all summer. And I grew to love her. I like to think she feels the same, but who knows? 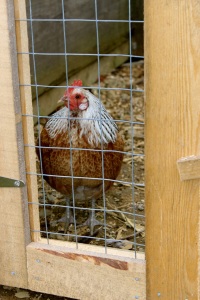 If you recall, we introduced a new flock of babes to our one remaining hen last Spring.  (Click here to read that sad tale: Garden Share – July)   That flock grew to produce four roosters, and everyone knows that’s at least 3 too many. We were especially disappointed to realize that both of the Silkies are fellas.  But it is the two Australorp guys that are bothering that sweet little hen – driving her to distraction, and causing us some real concern for her health.  Those guys could really hurt her in their enthusiasm.  For the past couple of weeks I have been keeping her in a dog kennel in the barn and only allowing her to free range when the other crowd stays in.  But that is far from an ideal situation.  With the weather turning cold, I worried she was cold at night, all alone like that.  And I feared she was getting lonesome.  We knew we had to make some decisions.

The solution is two of the roosters will have to go: one Ausralorp Roos and a Silkie.  We’d need two separate coops: one for the Australorp family and one for the Phoenix, Silkie, Houdan crowd.   Oh my, what a racket!

My carpenter (and mate) was home just for the weekend (between business trips) – and the rush was on!  Once started, it was important to get it done quickly and have every bird secure by mid-day Monday.  By early Monday morning, conversation went a little like this: Him: “Janet, I don’t think we can do it!  I don’t this we can make it!”  Me: “just focus on one task at a time…… focus! What do you want me to do?” 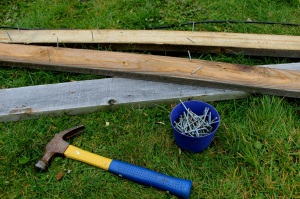 Which is how I got the exciting job of removing nails from boards.  I learned, the hard way, to take care not to kneel on this upturned nails.  And I tried not to comment (too often) about poses such as this which include too many blades and limbs. 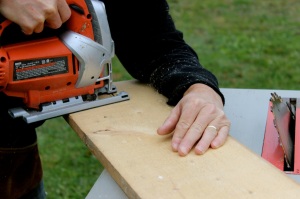 In spite of all that, or maybe because of it – it’s amazing what can be accomplished with a firm deadline, we managed to finish to the point in which all birds are secure for the week.  This weekend we will insulate and finish the interior.  They will be snug and ready for winter … And no one will be sleeping in the dog house. 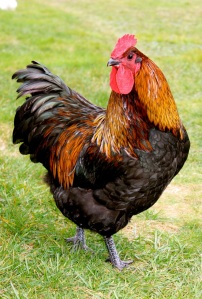 So, that’s how we came to be renovating the chicken coop.

Our Year-Round Market on the South Shore

The ramblings of a retiree who cycles and cooks in France

“The most we can do is to write — intelligently, creatively, critically, evocatively — about what it is like living in the world at this time.” Oliver Sacks

Life is full of adventures and opportunities