Last week I dug myself out of the snowbank that is Nova Scotia, and followed my traveling husband to Toronto for a couple of days.  He was off to work….. I was his sidekick. 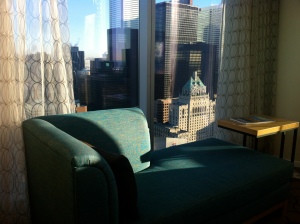 Our “home-away-from-home” was the snazzy new Delta Toronto Downtown.  That’s some pretty high living for a girl from the country.  High indeed!  Our room was on the 46th floor – the top floor.  And we had access to the Signature Lounge – I could get used to this.  The expansive windows of both our room and the lounge opened up to some pretty spectacular views over the city, a still partially frozen Lake Ontario and Toronto Island.  We looked down on the airplanes landing at the small airport there. 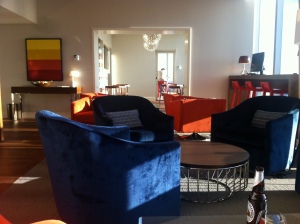 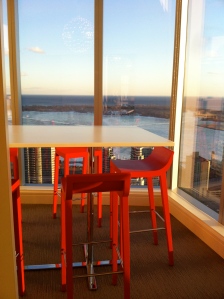 From those heights, we went off to explore the PATH – that underground walkway that covers over 30 kms (19 miles) of Toronto – under Toronto.  It’s pretty crazy:  these tunnels connect 50 building/office towers of the financial district and provide 371,600 square metres (4 million square feet) of retail space.  Thats 1,200 shops and services – looking around, I couldn’t think of a single convenience that was missing.  Except, maybe a public library – but there are book stores!

The idea is that a person can get from a subway stop or the railway terminal to work, or a hotel (there are 8 connected to PATH) or any number of cultural venues and conveniently shop and eat (I can’t say “dine”) along the way.  All without ever stepping out doors.  Which is very sensible – Toronto is a northern city, and the PATH “provides a safe haven” from winter’s cold and snow and summer’s extreme heat and humidity.

I can vouch for the convenience – I made my way through the PATH nearly every day we were there (me, and 200,000 or more other folks).  But, I can’t help but feel there is a little something “sci-fi” about it.  It’s like a whole other city beneath a city – all comfortably climate controlled, but without the benefit of sunlight.

I also had a little trouble orienting myself underground.  Eventually, I recognized “landmarks” and was able to move through pretty efficiently, I think.  But for a while, I know I went round in circles 🙂  For me, the signage wasn’t clear.  Apparently, though, there is a system.  According to the website, each letter in PATH is a different colour, each representing a direction. The P is red and represents south. The orange A directs pedestrians to the west, while the blue T directs them to the north. The H is yellow and points to the east.

Now you tell me!!! Simple – When you know how.  I’ll have to keep that in mind for next time.

More on this trip soon…..